Here is the second instalment of a piece researched by our recent work experience placement, Chris Rouse. You can find the first post here.

In an earlier piece, I wrote about research I’d been doing into the habitual offenders of Edwardian Worcestershire. Most cases seemed simple: a crime was committed and the perpetrator was easily identifiable. One man, however, proved far trickier to pin down.

What originally leapt out was the crime – sacrilege. Combing through the 1914-1916 volumes of the Register of Habitual Criminals, this was conspicuous by its rarity, appearing just once in Worcestershire. The 1914 register showed that, on the 21st  of October 1913, Reginald Stanhope Forbes (aliases Charles Styche, Gerald Buxton and Francis Jarroll), a cinema operator born in New Zealand in 1880, had been convicted of such a crime. I was intrigued to see what his sacrilege had entailed, so went to follow it up in the local papers, finding accounts in the 25th of October 1913 editions of Berrows Worcester Journal and the Worcestershire Chronicle.

Expecting some public bouts of blasphemy, or desecration of a cathedral, I was a little underwhelmed to discover that his ‘sacrilege’ comprised breaking into a Kempsey church’s alms box. The reportage was amusing enough, largely for the apparently lacklustre nature of Forbes’ defence. The prosecution had matched a fragment of a blade found in the alms box to the accused’s penknife. Forbes claimed he had been at Worcester Cathedral at the time of the crime and had found a handkerchief with a broken knife underneath his bench. As with the Kildare horse thieves, the small issue of witnesses rebutted this defence.

Now the story started to become more interesting. The prosecutor noted that forty alms boxes had been broken into around England, several in Worcestershire, and the defendant had been linked to many of these crimes. The judge, denouncing Forbes for fuelling a “selfish, idle, worthless and dishonest life” by stealing money meant for the poor, sentenced him to twelve months’ hard labour.

As well as this spree of breaking into churches, Forbes’ personal life was raised. He had, reported the 1913 newspapers, worked for two insurance companies in London and in Bristol, and as a dock labourer. He had a wife and children in Southend-on-Sea whom he left destitute in August 1911. He had also lived with a young woman in Bristol having claimed he was divorced; he left on the 4th June 1913 while she was pregnant. While in Bristol, he was arrested for stealing a postal order from the people he lodged with. If the 1913 dictionaries needed an illustration for their definitions of ‘bounder’ (even, whisper it, ‘cad’), then Reginald Stanhope Forbes was surely a prime candidate.

What’s more, his sacrilegious tour of the country continued over the years. A copy of the Police Gazette from the 4th of July 1923 showed Forbes was unrepentant and was still breaking into churches a decade later.   Here, the sense of mystery around the individual really started to develop.

The Gazette, in recording his further exploits, says he was born as ‘Maurice Clifford’ in New Zealand and had worked as a ‘theatrical artist’. He had been convicted for larceny and sacrilege, including larceny and embezzlement at St Albans (as Maurice Clifford), Bristol (as Charles Styche), Malvern (as Reginald Stanhope Forbes), and Hailsham (as Charles Sydenham Rebbeck Styche). Here was a clutch of names and aliases to pursue further. Who was this man?

This question was made easier through establishing that Francis Jarroll, Gerald Buxton and Reginald Stanhope Forbes were pseudonyms with no firm basis in reality. No census, no birth certificate, no marriage register, no document of any kind seemed to exist for any of these three names.

Two names were in the historical record, though. I found a birth certificate from New Zealand, 1880 for Maurice Clifford, and also a birth certificate from Acton, Middlesex, 1880 for Charles Sydenham Rebbeck Styche. I was lulled into supposing a relatively simple solution. Given that each record pertaining to the man known in Malvern as Reginald Stanhope Forbes listed his birthplace as New Zealand, I assumed the criminal in question was Maurice Clifford. He had come from Australasia, met Charles Styche at some point, and then for whatever reason assumed his identity periodically after committing a sacrilegious crime. That Clifford had listed, in the 1923 Police Gazette, ‘Charles Sydenham Rebbeck Styche’ (a fairly uncommon name in its entirety) as an alias meant this was unlikely to be a coincidence where Clifford had plucked a name out of thin air.

However, it swiftly became far more complicated than this. Many documents emerged referring to Charles Sydenham Rebbeck Styche. The 1911 census has him married and working as comedian in a music hall. He served as a marine from 1903 to 1907, then re-enlisted in 1916. Overlap appears in the details of the conviction of the man, whatever we may call him, in St Albans in 1915. Here, he appears as Maurice Clifford, with his aliases listed. His profession is ‘comedian’; this, given the other corresponding details, is probably not a coincidence.

Then I found Charles Styche in the 1912 Gloucestershire prison records. Here, he is a surveyor, apparently born in London. He was convicted in Bristol for stealing a postal order, just as the Worcestershire papers recorded when reporting about ‘Reginald Stanhope Forbes’. Again, this seemed simple; this, I thought, was Maurice Clifford serving prison time under someone else’s name, though claiming here to have been born in London.

Further investigation into Charles Styche’s life led to fresh uncertainties. In the 1911 census, he is married to Helen Styche and lived with their three children in Prittlewell, a district in Southend-On-Sea: the town where ‘Reginald Stanhope Forbes’ is meant to have left a wife and children destitute. By the time Charles re-enlisted in 1916, he was apparently not married; the form lists his prior marine service, and the signature is the same as that in the 1911 census, so they are almost certainly the same Charles Styche. 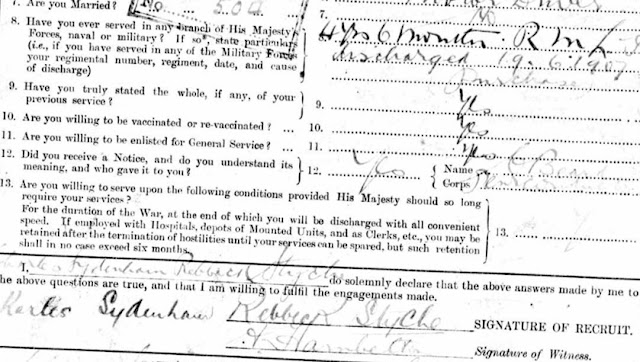 The ‘unmarried’ Charles Styche’s signature in his enlistment form, 1916.

However, Helen Styche died in Rochford, Essex, in 1921, near to where they earlier lived as a family. The ‘unmarried’ Charles Styche who enlisted in 1916 is not a widower. Could this be the man who left a wife and children destitute in Southend-on-Sea as Berrows Worcester Journal records, albeit there as Reginald Stanhope Forbes? Or could it be that Maurice Clifford stole not just a man’s name, but also his less than pleasant life story?

One issue is why the Worcestershire papers omit the man’s comedic and military careers. Perhaps he neglected to tell or they neglected to say; either option raises further questions. The myriad different jobs, the fluctuation between them, and their selective recording in various documents, remain a mystery.

Who, then, is the ‘original’? Did a New Zealander assume many of the details of Charles Styche’s life? Did Charles Styche take the name of a New Zealander, citing his place of birth for the 1914 register? For the man who was either a cinema operator or a music hall comedian, and quite possibly both, was his life one long amusing story, embellished with the details of others’? This could explain the constantly changing details in each conviction, the farcical defence in the Kempsey case, the homage to a famous artist, Stanhope Forbes, in one alias.

I believe it is likely –though far from certain- that the man arrested in Worcestershire for sacrilege and recorded in the Register of Habitual Criminals as Reginald Stanhope Forbes was born as Charles Sydenham Rebbeck Styche in Acton, Middlesex, who at some point met and ‘borrowed’ details from a New Zealander of a similar age called Maurice Clifford. The abandoned family, the 1912 conviction, and the repeated emergence of ‘comedian’ as a career all point this way – unless, of course, Maurice Clifford embellished his own back story using Styche’s life.

With the available sources, it may well be impossible to unpick all the tangled threads and wrap up the loose ends. The biggest, most answerable question is ‘why?’. Why did this man, wherever he was born and whatever his ‘true’ name was, assume so many aliases? If he were Charles Styche, what made him take the name and place of birth from Maurice Clifford? If he were Maurice Clifford, why did he assumed so many of the details –name, family, careers- from Charles Styche?

In trying to answer these questions and understand this complex character, we can only look at words on a page, often written by someone else and always within the constraints of a certain type of document. We have no diaries, no letters, no personal insights into the man behind the names; we have only snapshots of the lives he led or claimed to have led. While we can speculate no end about each man and the relationship between, this will always remain no more than conjecture. But what information we have presents a fascinating, tantalising collage of a man of many crimes, many names, and many lives.

[i] http://discovery.nationalarchives.gov.uk/details/r/C10815 [ii] The whole document is not available for free public access, but a text-only version of the section relating to our man of many names is available at http://www.lastchancetoread.com/docs/1923-07-04-the-police-gazette.aspx

One response to “Crime, punishment and mystery in Edwardian Worcestershire: Part 2”