This summer Worcestershire Archive Service was lucky enough to host the talented and enthusiastic Chris Rouse on one of the hundred-hour work experience placements we offer. During his time with us he had the opportunity get involved with a wide variety of the sort of jobs one might encounter in the archive profession, including some work on the Registers of Habitual Criminals held here at The Hive. Here, Chris tells about some of his findings:

A hush fell over the courtroom as the judge cleared his throat to deliver the verdict on the gang of six before him. Watching the events with special interest was a local innkeeper, Harry Alfred Jones of Alfrick, near Malvern in Worcestershire – the location of the trial. Jones had welcomed the six, now on trial for larceny, into his inn some time previously, later finding that they had stolen one of his precious belongings.

A search with the local constabulary ensued after a witness attested to having seen one of the six with the item in question under some cloth, which at the time was assumed to have been a baby. The hunt ended with the recovery of Jones’ property, which was eventually found in a beanfield.

In the courtroom, three of the perpetrators were found not guilty. George Williams, a twenty-five year old labourer, had admitted prior convictions and was blamed as the ringleader of the operation.

As half the gang breathed a sigh of relief, the punishments were delivered. Williams, and two other unnamed individuals, were each sent to prison for three months for orchestrating the theft of a joint of ham.

This high stakes, high octane case was reported in the 18th of October 1913 edition of Berrows Worcester Journal, a local paper which every week offered accounts of life, death, crime, commerce and politics to the people of Worcestershire. As well as providing a fascinating insight into local journalism and life in the Edwardian period, the paper also shows how easy (and absorbing) it can be to pull on one interesting thread and unravel a whole spool of historical information.

I had originally delved into the Hive’s extensive collection of microfilm, housed in the ‘Explore the Past’ area, to investigate a different line of enquiry. I had been working through the 1914, 1915 and 1916 volumes of the Register of Habitual Criminals, compiled by the Metropolitan Police force’s Criminal Record Office. 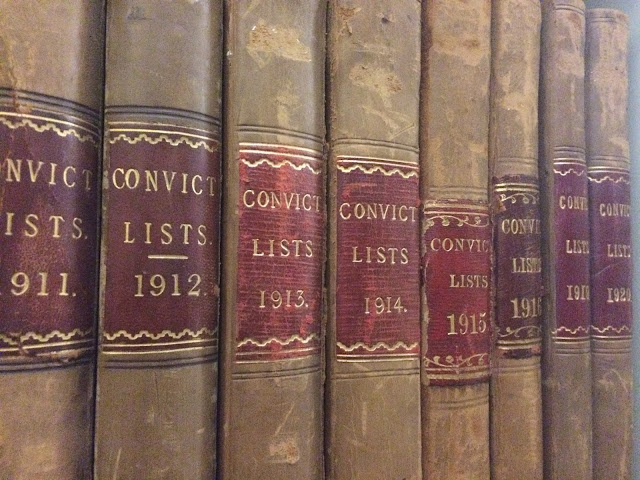 These weighty tomes took their form and function from the 1871 Prevention of Crimes Act, which stipulated that all people imprisoned for at least a month should be registered, with extra sentences meted out for repeat offenders.  Recorded details included prisoners’ appearance; any aliases; their birthplace; and the nature of their crime, and the books are excellent sources for researching local or family history through the murky lens of crime and punishment.

Having gone through three nationwide volumes to log any details of offenders either born or tried in Worcestershire, I set out to pursue any interesting looking cases; I’m not sure what it says about the county that the majority of cases were either fraud or some kind of animal theft.

An extract from a Register of Habitual Criminals.

I discovered the case of the missing ham (a novel in waiting, if ever there were one) while searching the local contemporary press for details of John Summers, who leapt out of the 1914 register for his large number of aliases, including Charles Hemming, Frederick Hewlett and Arthur Tulip. Berrows Worcester Journal and the Kidderminster Shuttle were silent over this multitude of names, but did record a bout of cattle rustling which, in the defending counsel’s own words, was not intentional larceny but an “idiotic semi-drunken freak”.

This lawyer, a Mr Riley Pearson, had experience in cases of slightly inept animal stealing. As I worked through the 1914 register, it emerged that two individuals, both from Kildare, had been convicted in Stourbridge of horse theft on the 30th of October 1912. This piqued my interest- was this a case of a sophisticated gang of Irish horse thieves, conducting their operations in Worcestershire? In short, no. Sidney McDonald and Thomas Moran, alias Thomas Henry Hands, wandered into a field and stole a pony belonging to a Mr Martin of Amblecote. When spotted, they claimed they were returning the animal after two other men let it loose. The several witnesses to the crime begged to differ and, despite Mr Riley Pearson’s efforts, the Irishmen were sent down.

These crimes from the early 1910s seem light, almost farcical, in their bucolic ways. They, and the manner in which they were reported, make a poignant contrast to what would strike Britain, Europe and the world only a short time later.

They are also, looking back now, rather open-and-shut. They could not be more dissimilar to another case, the further into which I delved, the murkier and more mysterious it became…

We will bring you the second part of Chris’ findings next week!