Just before Easter, our archaeologists were called out to investigate the discovery of a mammoth tusk at Tarmac’s Clifton Quarry, just south of Worcester.

The tusk was spotted by a sharp-eyed excavator driver at the site: realising the importance of what he had uncovered, he reported it to the quarry management. Tarmac immediately suspended operations in the vicinity of the tusk. Having worked with us on other archaeological investigations in the quarry, they contacted us straight away.

Within 24 hours Field Supervisor Graham Arnold, and Field Archaeologist and animal bone specialist James Spry, were out on site recording and lifting the tusk ready to bring it back to the archaeology offices at The Hive. Despite having been well-embedded into the underlying gravel and sand for thousands of years, it was remarkably well-preserved, but also extremely delicate. Graham and James examined the find spot and surrounding geology for clues about how and when it was deposited, and then carefully recovered it in one piece. 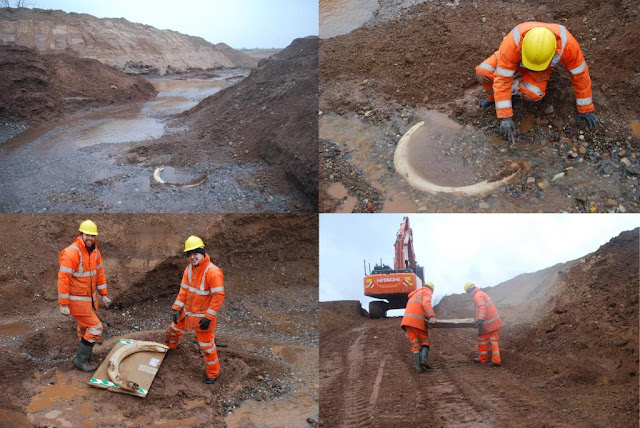 An initial specialist assessment of the find confirms it to be the remains of a tusk from a Mammuthus primigenius, or Woolly Mammoth. These impressive creatures once roamed the Worcestershire countryside around 50,000 years ago alongside our Neanderthal ancestors, during a period of the human past called the Palaeolithic. The size of the tusk suggests that it was from a young male animal, which could have grown up to eleven feet height at the shoulder and weighed up to six tonnes. 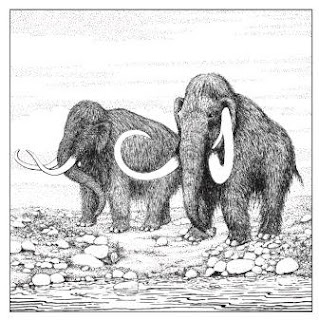 Thanks to Tarmac’s support, the tusk has been painstakingly dried out and stabilised by specialist conservator Nigel Larkin. It’s on temporary display this summer at Worcester City Museum and Art Gallery in Foregate Street, Worcester. The museum is open Monday to Saturday 10.30am – 4.30 pm, and entry is free. 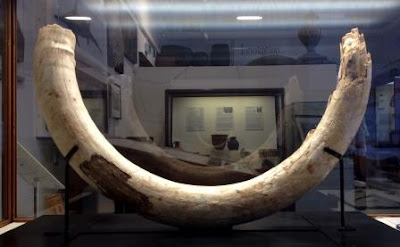 Senior Archaeological Project Manager Robin Jackson said: “Thanks to the very prompt and responsible actions of the quarry staff we’ve been able to recover this very interesting find from Worcestershire’s distant past. Discoveries of mega fauna (giant animal) bones in Worcestershire are rare and therefore this find is an important one which will hopefully inspire people to learn more about Palaeolithic Worcestershire.”

Nick Atkins, estates manager at Tarmac, said: “We’re excited that such a significant discovery has been made at our site and are very keen to see what else we can find out about it. It’s fantastic to discover something like this which is so well preserved and will help us and the specialists find out more about the creature and its history.”

Deborah Fox, Curator of Archaeology and Natural History at the museum has said: “We’re delighted to be able to display this wonderful specimen and would like to pay tribute to Tarmac for their swift action and care of this important discovery, and to Worcestershire Archive and Archaeology Service’s professionalism and expertise. It’s been many decades since a specimen like this came into the City Museum and we’re very pleased to have it here.”