St Patrick’s Day at The Tower 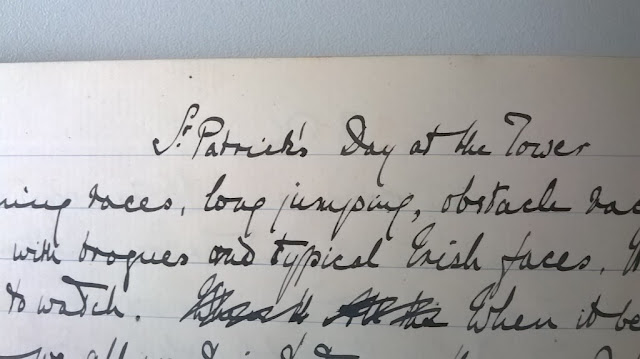 Within the Lyttelton Archive we have Maud Lyttelton’s diary of 1902/3. She kept a diary over several years, meeting many different society people, and she was not afraid to be honest with her options, making this a fascinating read.

Within her diary she describes St Patrick’s Day in 1902, when she was in London with her family. On this day she was invited to see the Irish Guards at the Tower of London. Getting there was a ‘life and death drive’ as they sped along in their car almost clipping horses legs and cutting in front of buses. She says they were nearly the death of a father, mother and child, but how close and whether they were driving or it was a chauffeur or taxi driver it doesn’t say.

The event at the Tower of London consisted of a series of sports events for the Irish Guards, consisting of running, long jump, obstacle course etc. She said all the men wore ‘brogues and typical Irish faces’. When it got cold they went to the Guard Room for tea, and they obviously knew a number of the officers and were well looked after.

In the evening she and her mother were invited out for dinner. Her mother was seated by a man who was a grandson of Byron, who was described as being odd looking, although very pleasant. 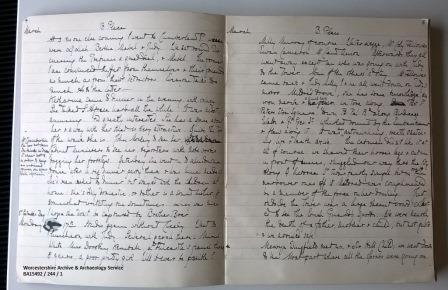 The Lyttelton’s of Hagley Archive has been catalogued over the past couple of years. The Lyttelton collection came into public ownership in 2010 as part of the Acceptance in Lieu Scheme whereby the nation accepts valuable assets such as archives against tax liabilities and in 2012 Worcestershire Archive and Archaeology Service became the collection’s permanent home. It can be searched online at http://e-services.worcestershire.gov.uk/CalmView/. This diary can be viewed in our Original Archive Area at The Hive, at reference number 705:104 BA15492 /244 /1.

2 responses to “St Patrick’s Day at The Tower”