This week’s post is by Rosie Pugh, one of our volunteers, who used one of the autograph books in our collection to research Hartlebury Castle’s role as a VAD hospital in The First World War and some of the soldiers who went there to convalesce.

When my interest in archives was piqued last summer and I decided to seek out some work experience in the sector, I inquired as to whether I could spend some time at the Hive as a volunteer. For the past two weeks I have been lucky enough to be on a 100-hour work placement with the Worcestershire Archives and Archaeology Service, and it has opened my eyes to the daily wonders of exploring the past. My work here has been varied and fascinating: from locating packages in the Hive’s subterranean strong rooms, to transcribing oral history interviews about a local school; from removing rusty staples and sewing the spines of unbound books, to making digital copies of photograph slides with the most up-to-date kit available. It has given me a wonderful insight into the daily workings of a local authority archive, where every day brings a new surprise.

This experience has also allowed me to hone some of my own research skills. One project I worked on was looking at Hartlebury Castle’s history as a Voluntary Aid Detachment Hospital in World War One. This project is part of Worcestershire War 100, a programme of events and activities over the next four years which commemorate the centenary of the Great War and Worcestershire’s role in it.

The only surviving documentation from Hartlebury Castle VAD Hospital is a series of scrapbooks which record the names, regiments and personal circumstances of many of the soldiers convalescing at Hartlebury during the War. The autograph book I was working on was put together by Nurse Laura Stocks. This is not a strict visitor’s book: many of the entries are hand-drawn pictures or notes, photographs of croquet teams or convalescents in fancy dress. Many of the men’s faces or handwriting appear in Nurse Stocks’s book a number of times. However, there is one soldier whose presence is felt most strongly across the pages: Private G. H. Boot. 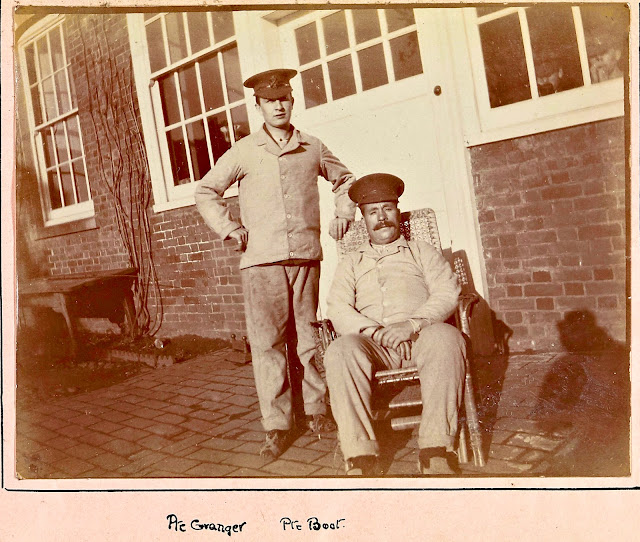 His name is recorded in Nurse Stocks’s hand as ‘Pte Boot’ alongside three photographs in the book, which show him to be a thickset man with a dark moustache. 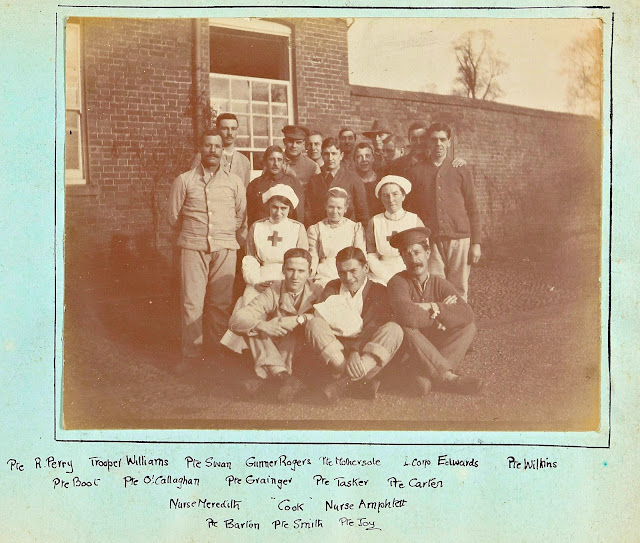 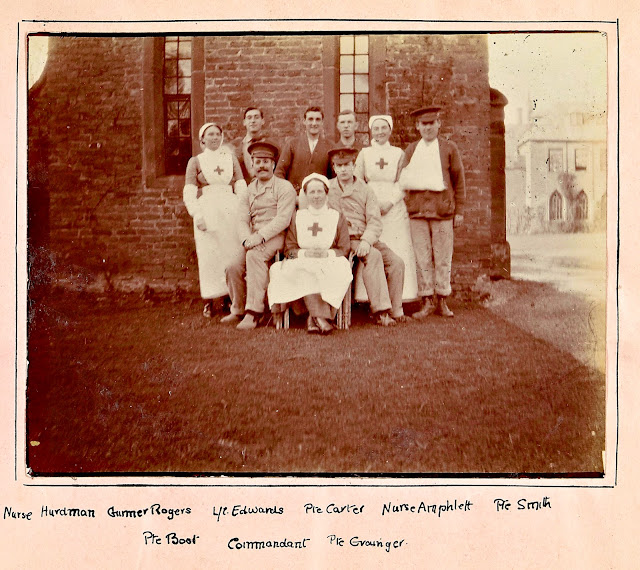 Boot does not give much information about himself, unlike some of the other soldiers who write in the scrapbook. Private JJ Barsten, for example, writes his name, number and regiment – 3246, 2nd and 3rd Battalion Royal Fusiliers, City of London Regiment – along with the injuries he has sustained and the place he last served: invalided from Sulva [Suvla] Bay on the 2nd Feb 1915 with frozen feet.

Boot, on the other hand, does not directly record his rank, regiment, injuries or battles served. His presence in the scrapbook is notable because of the sketches he draws for Nurse Stocks, which he dates and signs ‘G. H. Boot’. The first, from 7th January 1916, is a simple pencil sketch of a scroll bearing the words ‘Forget-Me-Not’. 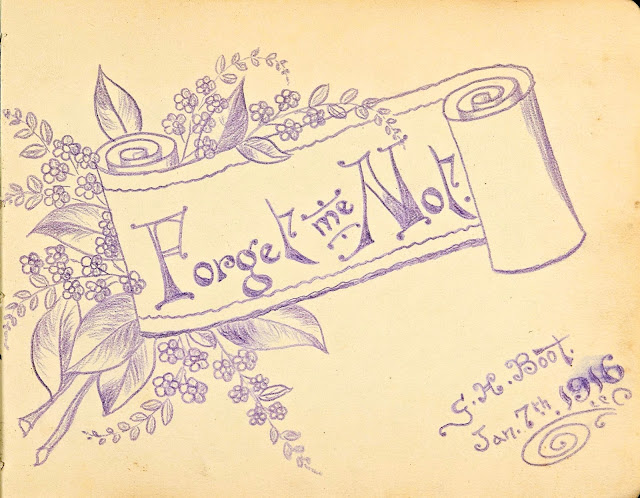 The next page reveals a beautiful painting by Boot, one of the most accomplished in the scrapbook, signed 14th January 1916. 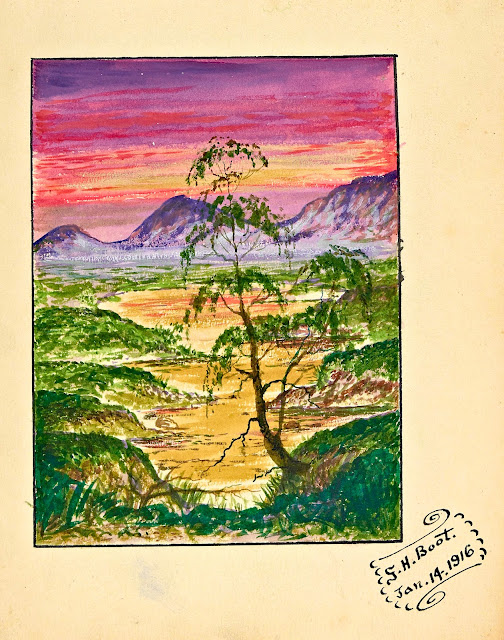 Although we do not get a sense of the soldier G. H. Boot, we do get a sense of him as an artist and as a man. He, along with many of the other convalescents, writes a thank you note to Nurse Stocks for her kindness during his stay. 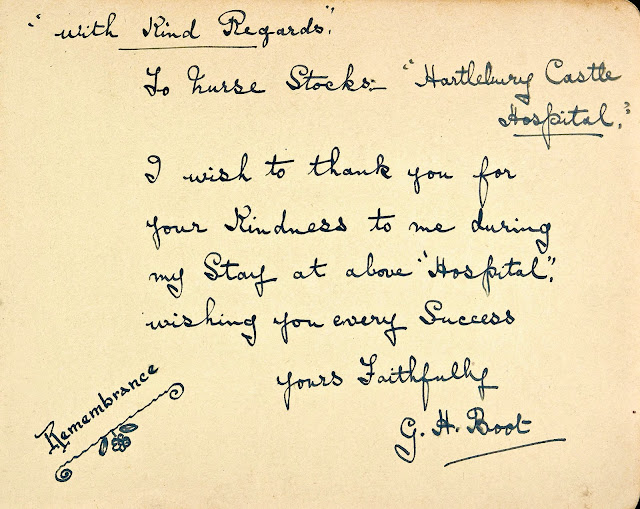 The only civilians who write in the scrapbook other than Nurse Stocks are the mother and wife of Private Boot, who visit him on the 19th January 1916. On the far left and far right in the middle of this page you can see the autographs of ‘Mrs A Boot, Mother to Pte Boot’ and ‘Mrs Boot, Jan 19 1916, Wife to Pte Boot’. Unfortunately I’ve been unable to find out anything else about them. All in all, the Boots have proved to be a bit of a mystery. 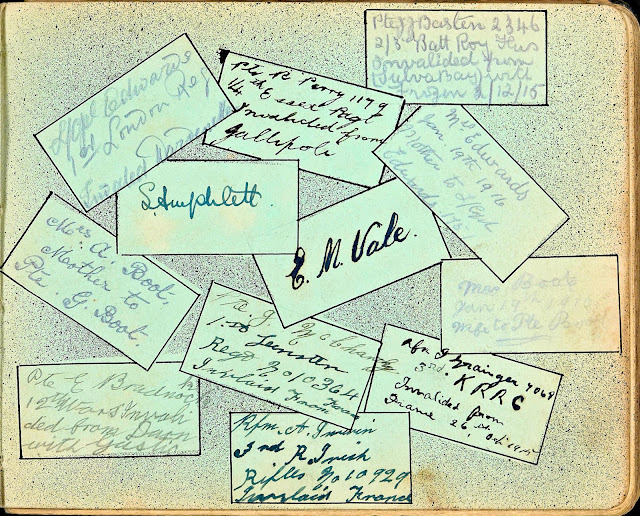 Is it possible that they are the same person? Well, it would be unusual for the record of Lieutenant Boot not to mention that he had previously been a private, but not necessarily unheard of. The life expectancy of lieutenants in World War One was just six weeks – they led their troops from the front, and as a result of this they had to be replaced in quick succession. It is possible that Private Boot was promoted to ‘temporary lieutenant’ on his return to war after convalescing at Hartlebury.

However, there is a chance that these are two different people. Boots, the well-known high street chemist, was founded in Nottingham – even though ‘Boot’ is a somewhat unusual surname, if there was any place in the country where there is likely to be a proliferation of ‘Boot’s, it would most likely be in the Nottinghamshire regiment.

Although G. H. Boot becomes a difficult man to track outside of Nurse Stocks’s scrapbooks, within their pages he is a vibrant contributor. We see his face, his handwriting, his artwork and records of his family. Being able to recognise a recurring figure now, exactly 100 years on since January 1916, somehow helps to bring the past to light.

If you have any more information about Private G. H. Boot or his family, please feel free to let us know!

An exhibition on the role of Hartlebury Castle in World War One will be on display from 12th March 2016 at Worcestershire County Museum. For more details visit their website.