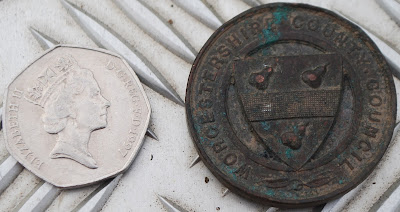 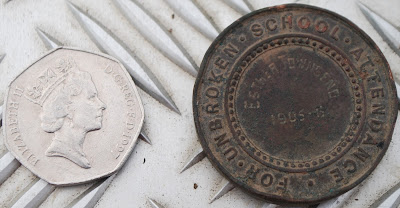 The school attendance medal discovered during a Worcester excavation

Archaeological objects are fascinating, linking you with someone who owned or used the item, but most time the person remains anonymous. One find which was passed to us recently though has a name which has allowed us to investigate.

A school attendance medal, with the name of Esther Townsend engraved, was found during a Worcester excavation and passed to one of our archaeologists, Graham Arnold,  to find out about it. Searching through the records here Graham found that there was an Esther Townsend born in 1897, making her 8 or 9 years old when she received the medal. She lived on Partridge Lane, Lower Broadheath, with her widowed mother, who was a laundress, and six siblings. Presumably she went to the school at Lower Broadheath but sadly we don’t have the attendance registers for those years to confirm. The medal would reward 100% attendance, which was rare in schools considering the family pressures to help with jobs, earn money, help with the harvests or problems with the weather. Checking marriage records Esther then seems to have married Joseph Jackman in 1922.

If you think this might be an family member please contact us through explorethepast@worcestershire.gov.uk or phone us on 01905 766352.