Christmas with the Talbots 1915

Lavinia Talbot née Lyttelton kept a diary from her teenage years right through to her 70s.  The diaries, now housed at The Hive, provide a unique window on her daily life, thoughts and feelings and in particular her reflections on life during the First World War.  1915 had been a difficult year for the Talbots as their youngest son Gilbert had been killed on the Western Front aged just 23, so like so many other families of the time they were facing Christmas without a loved one.  Lavinia’s other two sons, Edward and Neville, were also serving in the armed forces and would not be home for Christmas.  Lavinia decided not to spend Christmas in her own home, but with her daughter, son-in-law and grandchildren at Harrow.  It sounded a sharp contrast to the Christmas of 1914 when she was at home at Farnham Castle with a party of 25, including her beloved Gilbert.

Trip out to London Just as we might go out and about in the run up to Christmas Lavinia went up to London to take in a show, see some friends and do a bit of shopping.  She also went to hear her husband speak at St Margaret’s, Westminster, to listen to John Buchan’s lecture at the Eolian Hall and to hear Muriel Foster, a friend of Elgar’s sing.  The show she went to was “Peg o’ my heart” a popular musical comedy of the time.  It was also a show which her son Gilbert had particularly liked and she recorded in her diary that she could ‘hear & see Gilbert’s enjoyment of the wit and sparkle’. 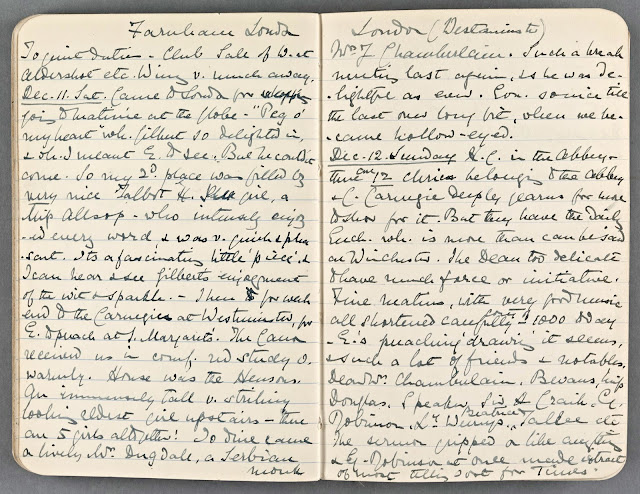 Lavinia travelled up to Harrow on 23rd December and spent Christmas Eve doing a bit of last minute shopping.  Christmas Day started with carols from her grandchildren and everyone going to the church service.  The present giving was after lunch.  She did not record what they ate other than ‘our’ plum pudding and mince pies.  The day was rounded off by a game which had been one of the presents.  Lavinia’s verdict on the day was that ‘somehow it felt less gaunt & different & yet different than I feared & we felt thankful.’ 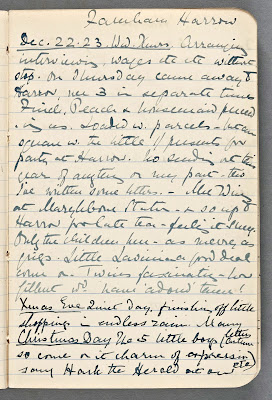 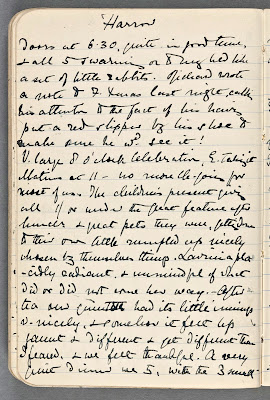 Boxing Day brought particularly bad and windy weather, though Lavinia recorded that it didn’t dampen the high spirits of the children.  The day did, however, bring a surprise guest when Lavinia’s son Neville turned up on the doorstep on a week’s leave, much to Lavinia’s joy and delight.  She also noted the changes in him that the War had brought and in particular that ‘the beloved reddish brown hair’ was ‘vanishing.’ 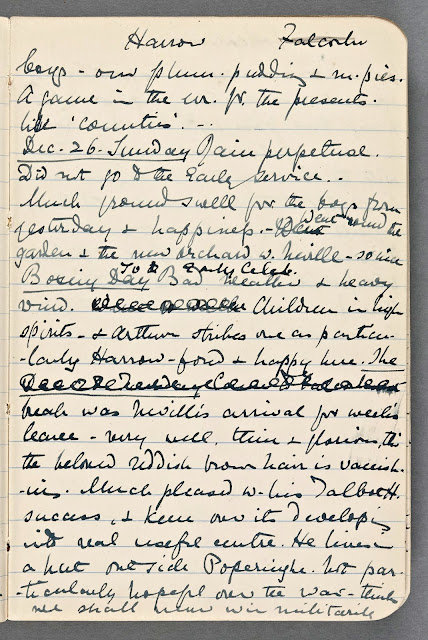 Seeing family at Christmas was important then as now so the Talbots travelled on between Christmas and New Year to Falconhurst, the Talbot family home, where there was a full house.  Lavinia also took the opportunity to catch up with her sister Lucy, her cousin Mary Drew and her niece Mary Becher who were staying at nearby Penshurst.

The course of the war seemed never far from Lavinia’s thoughts in her diary entries and she made several references to events during the course of December, such as events in Salonika, the replacement of Sir John French with Sir Douglas Haig and the withdrawal of troops from the Dardanelles which she described as ‘a tragic heroic story ending in nearly complete failure’. 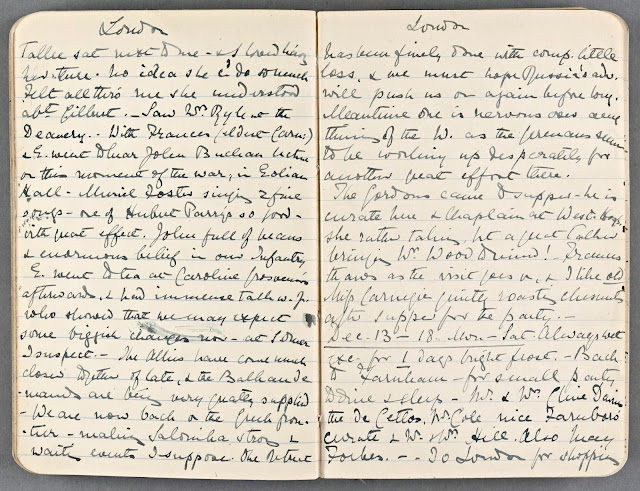 Some of Lavinia’s comments on the War

For Lavinia the last day of the old year had often been for her a time for reflection, just as many people do today, and 1915 was no exception.  She reviewed the campaigns and the roles of allies and enemies, but also looked ahead to issues such as conscription.  She noted that it was a year which they had ‘all shared in beginning’ but she was ‘thankful to turn over into a new year, she surely can’t be quite so sad & awful as this one.’ 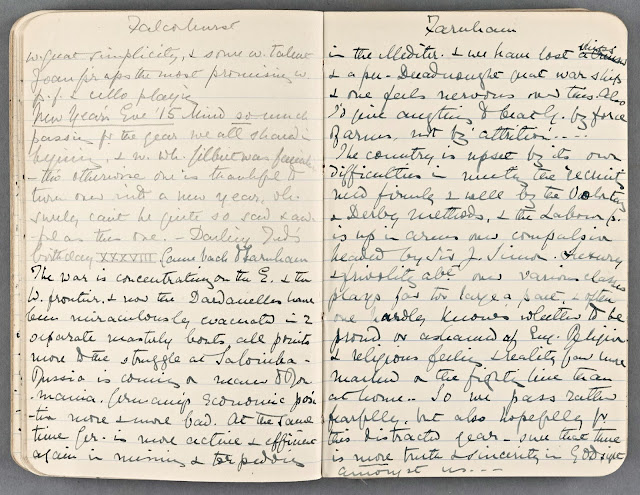