In the course of cataloguing a collection there will be items which are found to be in poor condition and require some conservation work.  Some of the work will be minor such as fixing tears, removing sellotape or protecting the item with secondary packaging such as a custom made wrapper.  Other items may need more substantial work.

In the course of sorting and reboxing the Lyttelton collection a number of torn up pieces of paper were discovered in the bottom one of the boxes.  They turned out to be pieces of some letters.  It was possible to group the fragments according to handwriting style to identify three different letters.  They were then handed over to our Conservator, Rhonda. 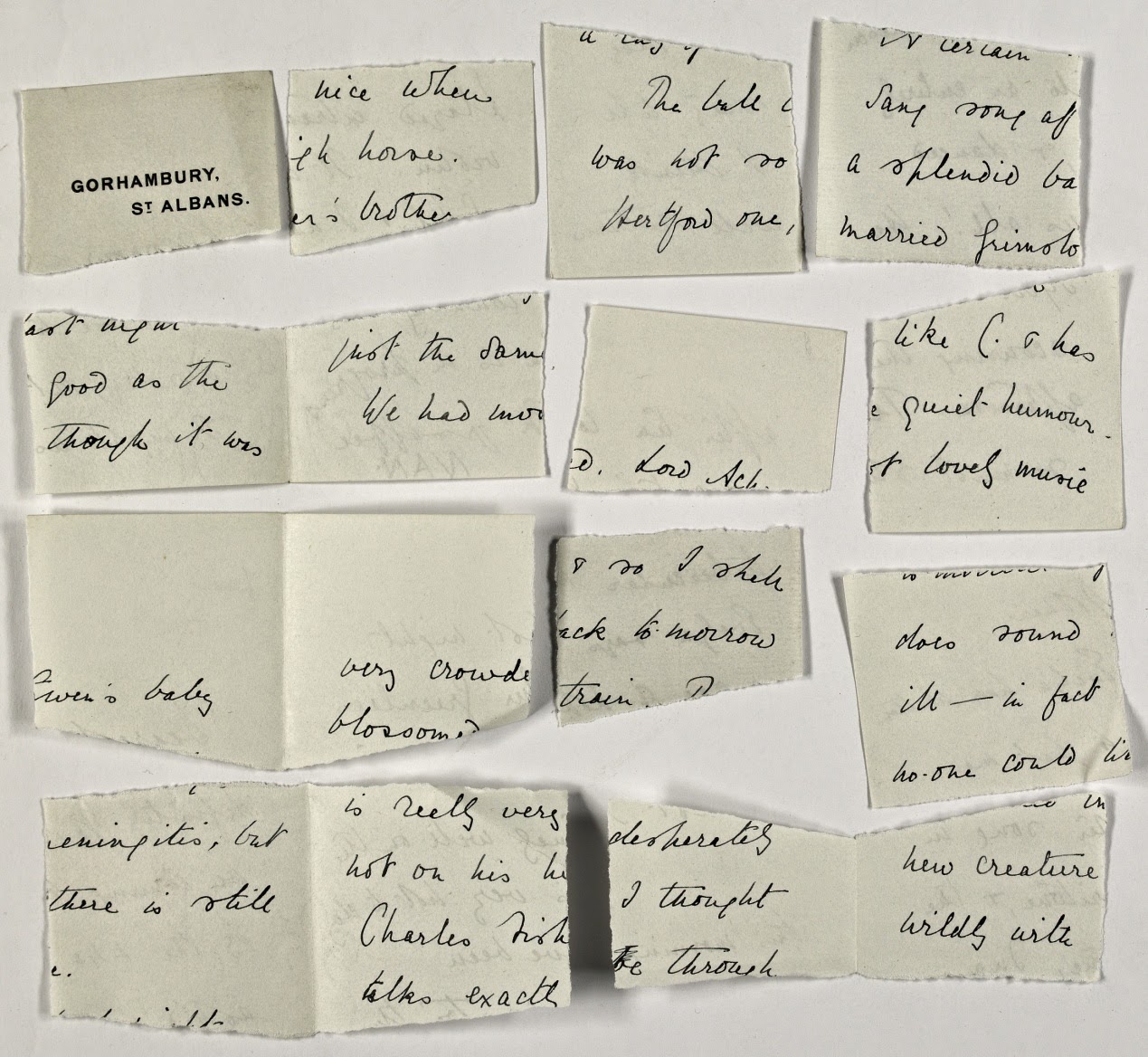 One of the letters before repair

Rhonda was able to look at the fragments, determine which piece went where and then make an almost seamless repair of each letter.  She describes the technique she used:

‘By carefully looking at the letter fragments, I was able to determine which piece went where.  Luckily the letters had been torn which meant the paper was split diagonally.  This made it easier to re-align the text, as edges went under and over each other to hopefully produce an ‘invisible’ repair.  Had they been cut, the edges would have to be butted up to each other, with more possibility of moving during repair and the repair would have been more obvious.  After carefully weighting the fragments in place, I placed a thin strip of very fine Japanese tissue along the tear, and brushed some Japanese wheat starch paste through the tissue.  This was left to dry under light weights, and then repaired in the same way on the back.  It was a fun challenge to get the letters back together, a bit like doing a jigsaw but without a picture to go by.’ 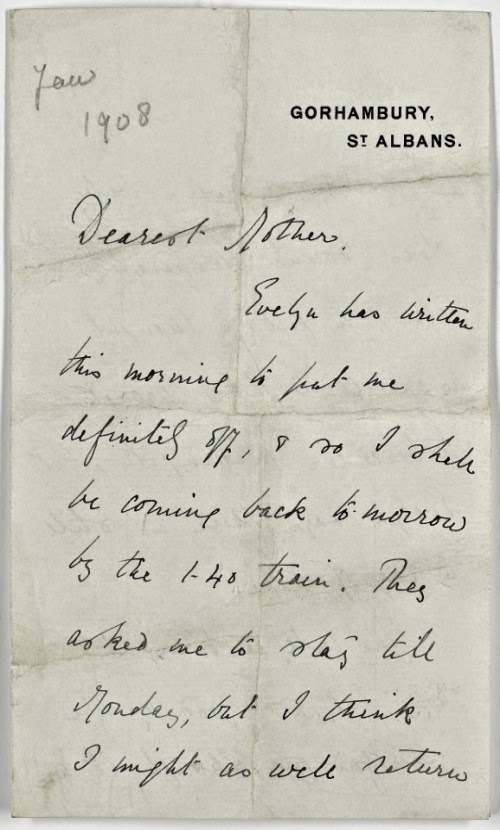 The front of the above letter after repair

What does the letter tell us now it’s repaired?

It is not immediately clear why the letter would have been torn up as there does not appear to be anything particularly personal, sensitive or confidential in it other than perhaps the mention of a very ill baby.  It’s mostly social chit chat about travel arrangements and a description of a ball and musical entertainment while the writer was staying at ‘Gorhambury’, the home of James Walter Grimston, 3rd Earl of Verulam.

‘Nan’, the writer of the letter, was Francis Henrietta Lyttelton, daughter of Charles George Lyttelton, 8th Viscount Cobham, so ‘Mother’ was his wife Mary.  Someone has added the date ‘Jan 1908’ to the letter and the content and chronology of the letter is consistent with other letters written by Nan in January 1908.

The first page of the letter mainly relates to changing arrangements.  On page two Nan talks of Gwen’s baby being ‘desperately ill’ with tubercular meningitis.  It’s not clear who ‘Gwen’ is, but Nan had a married cousin Gwendolene Stephenson née Talbot whose baby died in January 1908 aged one, so this could be the ‘Gwen’ referred to.  Gwen had an older sister Evelyn who might therefore be the ‘Evelyn’ also referred to in the letter. 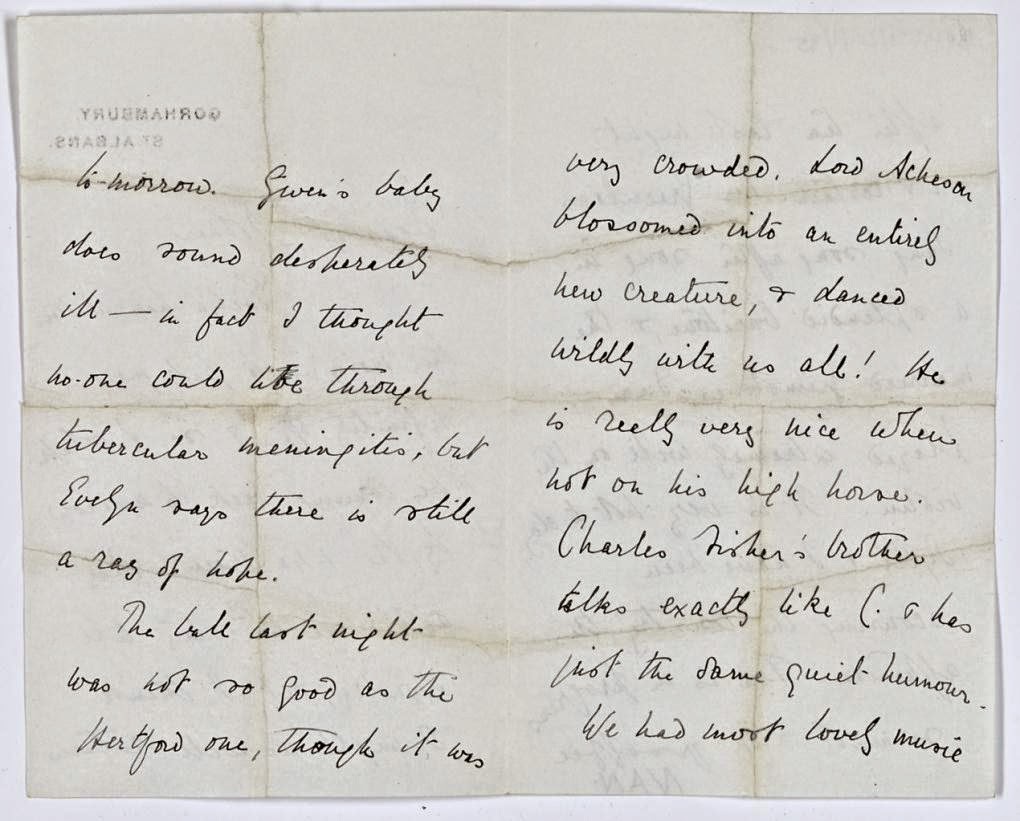 Musical entertainment for the previous evening had been provided by singing from a Mr Greenlees, whom Nan describes as ‘a splendid baritone’ and ‘the married Grimstone, Ina’ who played the violin well.  ‘Mr Greenlees may be Weir Loudon Greenlees (1882-1975) a well-known Scottish baritone of the time.  The Earl of Verulam had several daughters, including Sybil mentioned at the bottom of page four.  Two daughters seem to have been married at the time of the letter – Hermione, who had married in 1904 and Aline who had married in 1907.  The latter may be more likely given her name ends ‘Ine’. 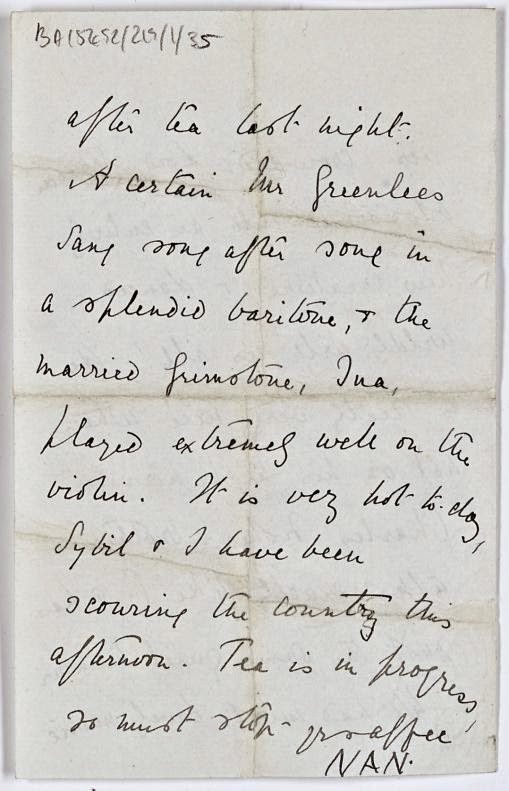 It was a very interesting exercise to piece the letter back together and then try to find out about its contents to see if they would shed light on why it was torn up.  Other than the illness of the baby, nothing obvious has presented itself, so the reasons for it being torn up and kept rather than thrown away, remain a mystery.