Treasures from Worcestershire’s Past: ~29~ Kidderminster’s Forgotten Potters: Finds from the DigMinster Community Excavation

This week’s Treasures, brought to you by Archaeologist Rob Hedge, were uncovered during a recent community excavation called ‘DigMinster’. The series of finds uncovered during the course of this project provide an insight into a largely forgotten chapter of Kidderminster’s industrial heritage:

Last year, our archaeologists led a month-long community excavation at St Mary’s Church in Kidderminster, part of the Kidderminster Civic Society’s Historic Kidderminster Project, and enabled by funding from the Heritage Lottery Fund.

The ‘DigMinster’ excavation was led by Worcestershire Archaeology Project Officer Richard Bradley. The full report from the excavation, and more background to the project, is available here. 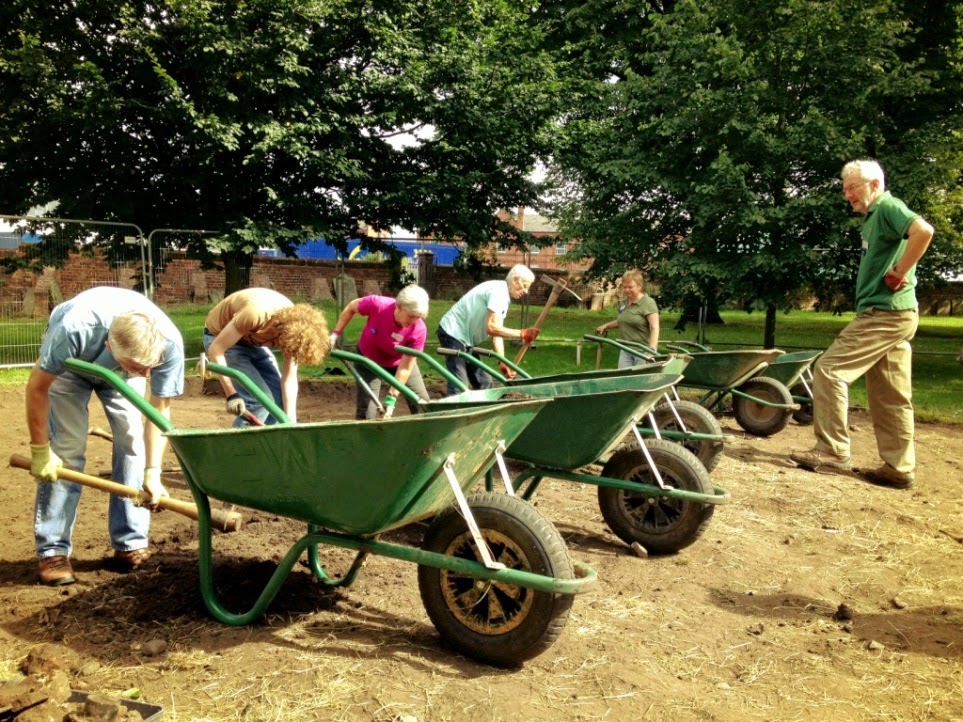 Some of the most intriguing finds to come from the project were small fragments of pottery and pottery-production waste. At first sight, they’re unglamorous artefacts – tiny sherds of mis-fired cream and biscuit-coloured plates and dishes, but they’re a window into an intriguing and little-known chapter of Kidderminster’s industrial heritage. Finished vessels are frequently found far from production sites, as they were traded widely, but production waste is a ‘smoking gun’, as it would generally be dumped very close to the site of the kiln. 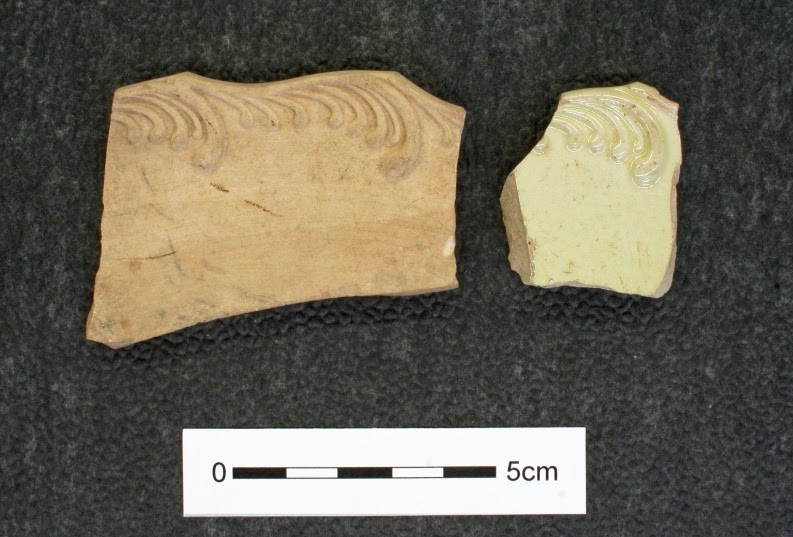 Creamware: the unglazed sherd is a ‘waster’, broken during or rejected after the first stage of firing. The glazed sherd on the right is an example of the finished product.

In addition to misfired pots, we discovered pieces of ‘kiln furniture’, fragments of coarse fired clay that were used in the kiln during firing to protect the pottery. These included fragments of box-like protective casings called ‘saggars’ and pieces of ‘wad’, the name given to curved rods of clay used to create a seal between stacked saggars to prevent kiln fumes from contaminating the glazed vessels during final (‘glost’) firing. 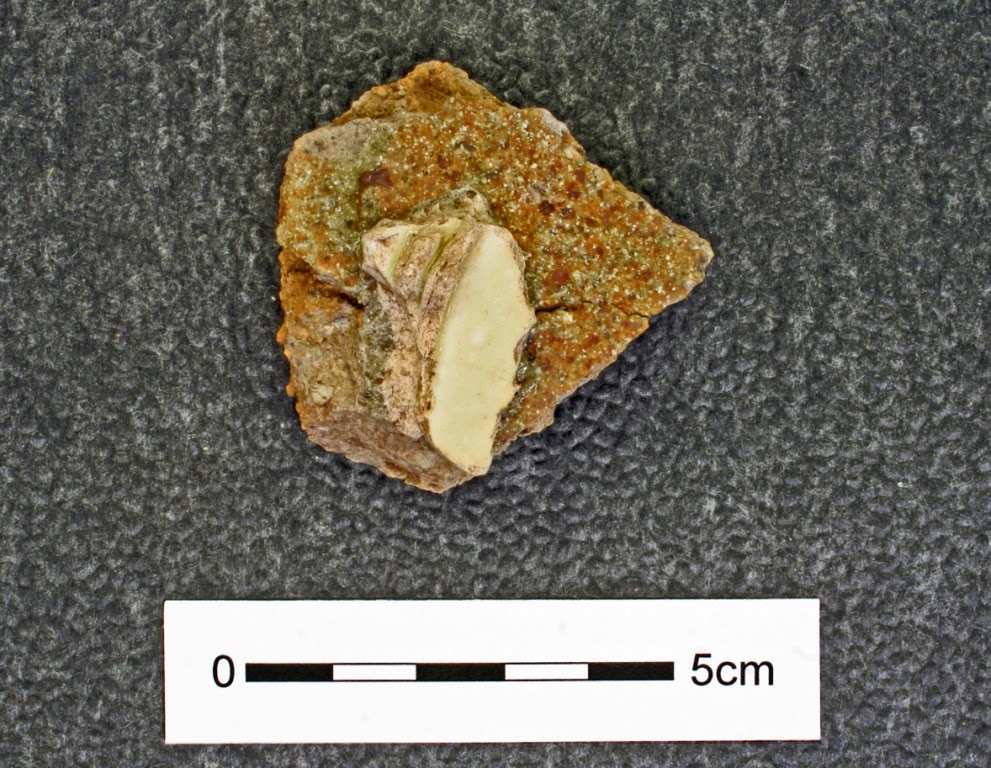 Kidderminster is famous for its carpets. Having been a centre for silk and worsted weaving, the late 18th century saw a shift in the dominant industry with the start of a booming carpet industry. Despite a decline in the late 20th century, carpet manufacturing is still a major local employer. Much less well-known, and shorter-lived, is the role of pottery manufacturing in Kidderminster’s development. The arrival of the canal to the town in 1772 dramatically improved transport links, which would have enabled the importation of the raw materials required for pottery manufacture, and the export of the finished article. Although this helps to explain how a pottery industry developed in Kidderminster, it doesn’t answer the question of why a town with no prior ceramic tradition suddenly started producing pottery.

Research by ceramic historian Rodney Hampson (1994) provides the answer. Production waste was discovered near to St Mary’s Church during the construction of the ring-road in 1965 by C. I. Walker, a builder and keen-eyed amateur archaeologist. An engraving made around 1780 shows a smoking pottery kiln near the church. Detailed research into documentary sources including insurance records and newspaper notices has established that the brothers Nicholas and Joseph Phipps started manufacturing ‘creamware’ in a single kiln in about 1778. The Phipps were declared bankrupt in 1782, but the works were taken on by Ralph Stanley and Moses Turner. It seems to have ceased operation by 1798.

The exact location of the works seems to have been in a three-sided courtyard backing onto the east bank of the River Stour, with an archway leading onto Wharf Hill. It is recorded on the 1883 Ordnance Survey map as a ‘Carpet Works’, by which time the kiln seems to have been demolished. It now lies directly beneath St Mary’s Ringway, just to the south of St Mary’s Church. 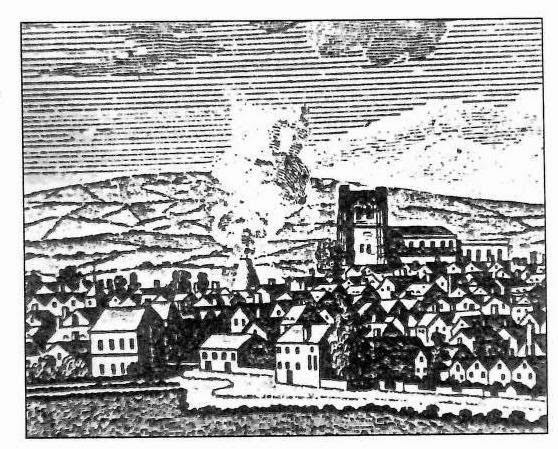 Creamware was very popular in the late 18th century, and Rodney Hampson suggests that its popularity may have been behind the decision to set up the works in Kidderminster. The town’s weaving industry was in decline, and the new canal offered the promise of fresh commercial opportunity. However, the fledgling Kidderminster pottery industry was soon overtaken by the carpet boom, and the experiment lasted just 20 years. It remains a little-known chapter in Kidderminster’s industrial heritage, a bold experiment at a time when the town was searching for a new model of economic prosperity.

On 12th July 2014, some of the volunteers who participated in the excavation will be displaying a selection of the finds at the Kidderminster Carpet Museum. If you’d like to find out more, come along and talk to them.