Treasures from Worcestershire’s Past: ~28~ Western Alvechurch: A distinctive ‘At Risk’ historic landscape

This week’s Treasure has been chosen by Jack Hanson, Historic Landscape Officer. He has decided to highlight an area west of the village of Alvechurch, Bromsgrove as representative of the many locally distinctive, significant, and valued historic landscapes across the county which remain largely under-represented and unprotected.

Alvechurch Marina, along the Birmingham to Worcester Canal

While many historic and archaeological features and landscapes are protected by statutory designations (e.g. listed buildings, Conservations Areas, Areas of Outstanding Natural Beauty), there is a common misconception regarding the proportion of historic environment assets which they represent. In reality, such designations encompass a small proportion of the landscapes and features which define our collective heritage. For instance, less than 10% of surviving pre-20th century structures are listed buildings, with a large proportion of the remainder situated beyond the boundaries of Conservation Areas. Further, criteria for designating ‘significance’ broadly overlook locally significant features and character in favour of criteria pertaining to national importance.

‘Landscape’ is also widely overlooked in protecting individual assets rather than their setting, which so often contributes substantially to their value. Large swathes of the landscapes and ‘townscapes’ which define Worcestershire’s urban and rural areas, valued for their distinctive character and sense of place, therefore remain unrepresented. These landscapes are at substantial risk of degradation through ill-conceived and inappropriate development which is not responsive to local landscape character, and wrongly assumes a lack of historic environment ‘significance’ through absence of statutory designations. 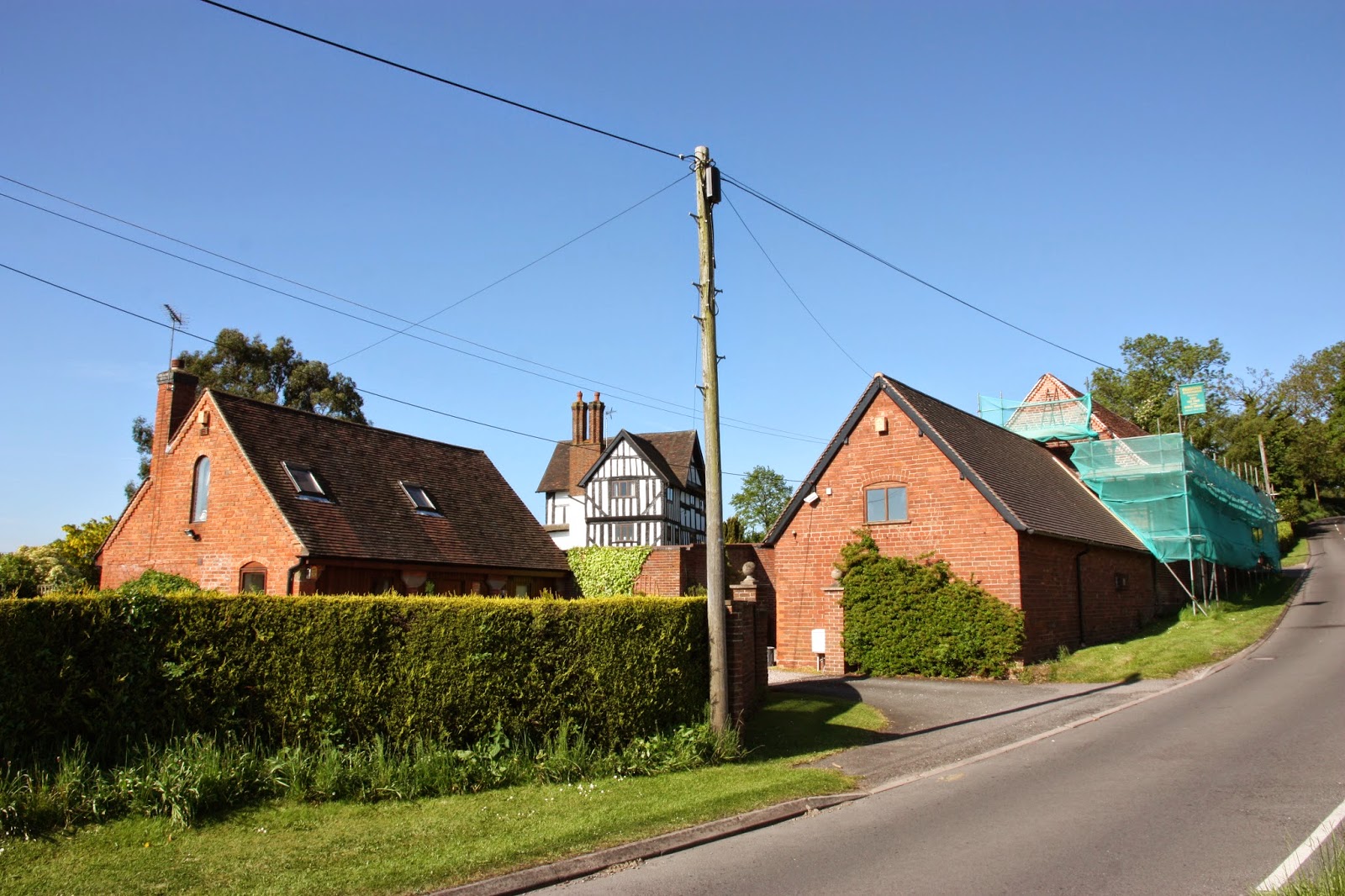 To illustrate this, I will discuss an area of landscape west of the village of Alvechurch, situated north of Redditch and immediately south of the M42. This area was identified during an English Heritage funded pilot project titled the Worcestershire Villages Historic Environment Resource Assessment which aimed to develop a method of ‘townscape characterisation’ to support local heritage and planning initiatives. This landscape was identified as of particular local distinctiveness and value, yet was deemed ‘at risk’ due to its low representation within historic environment listings and records.

The area is situated within a coherent remnant historic landscape incorporating the historic settlements and farmsteads of Scarfields, Withybed Green and Cooper’s Hill, interspersed with well-preserved enclosures adjacent to the industrial waterways, marina and brickworks of the Worcester and Birmingham Canal and the 19th century railway. 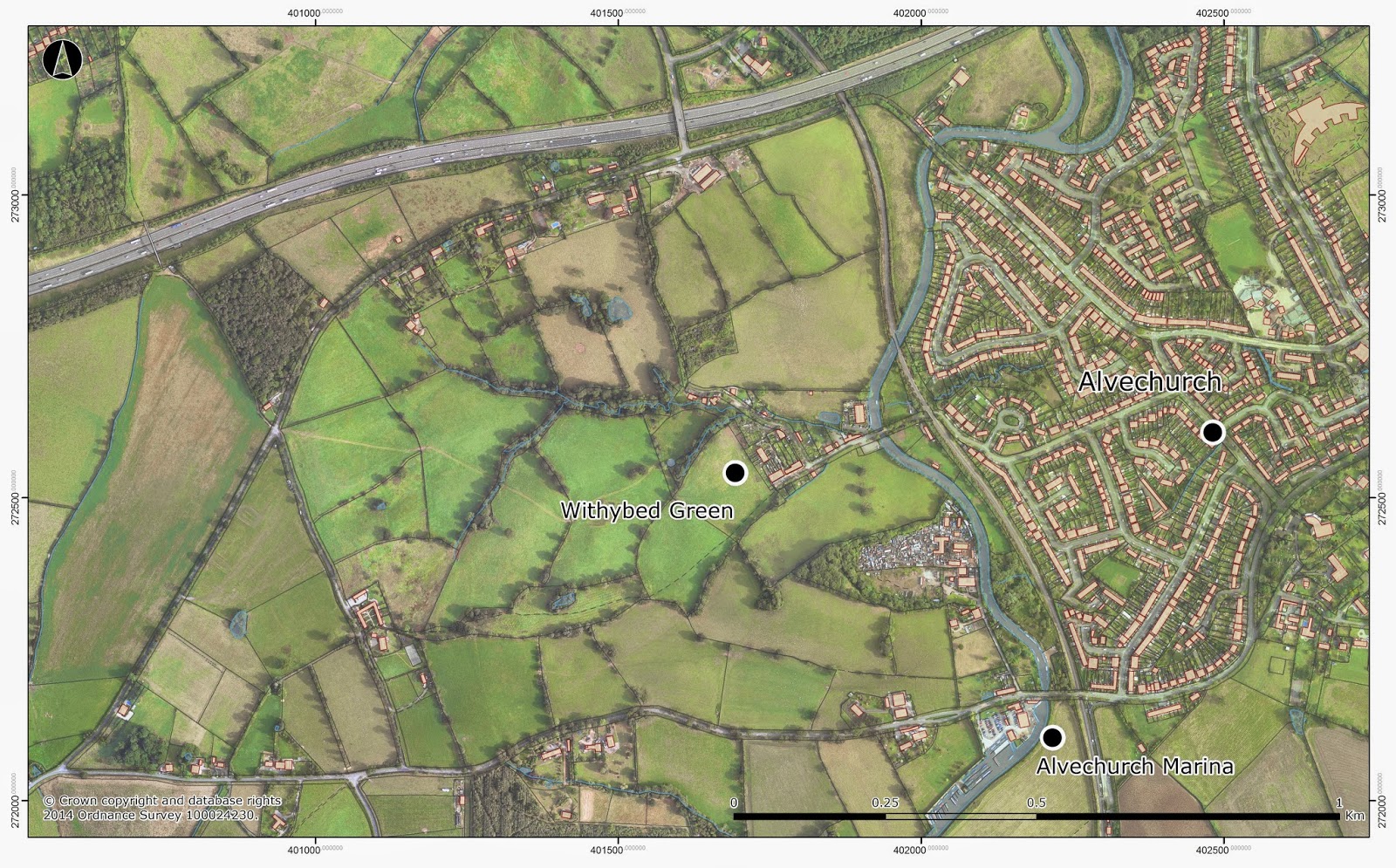 The landscape is divided by piecemeal enclosures of exceptional condition with a plethora of historic hedgerows and mature hedgerow-trees. Minimal sub-division or amalgamation of the enclosures has occurred in marked contrast to the broader regional landscape, with the enclosures interspersed by highly discernible earthworks and ponds pertaining to former marl pits. Historic footpaths and bridleways continue to generate a high sense of permeability throughout the landscape, and the raising topography grants highly characteristic viewsheds of the parish. Semi-ancient natural woodlands and modern plantations are interspersed between the field parcels, with dense tree-lines defining many of the topographic ridgelines. 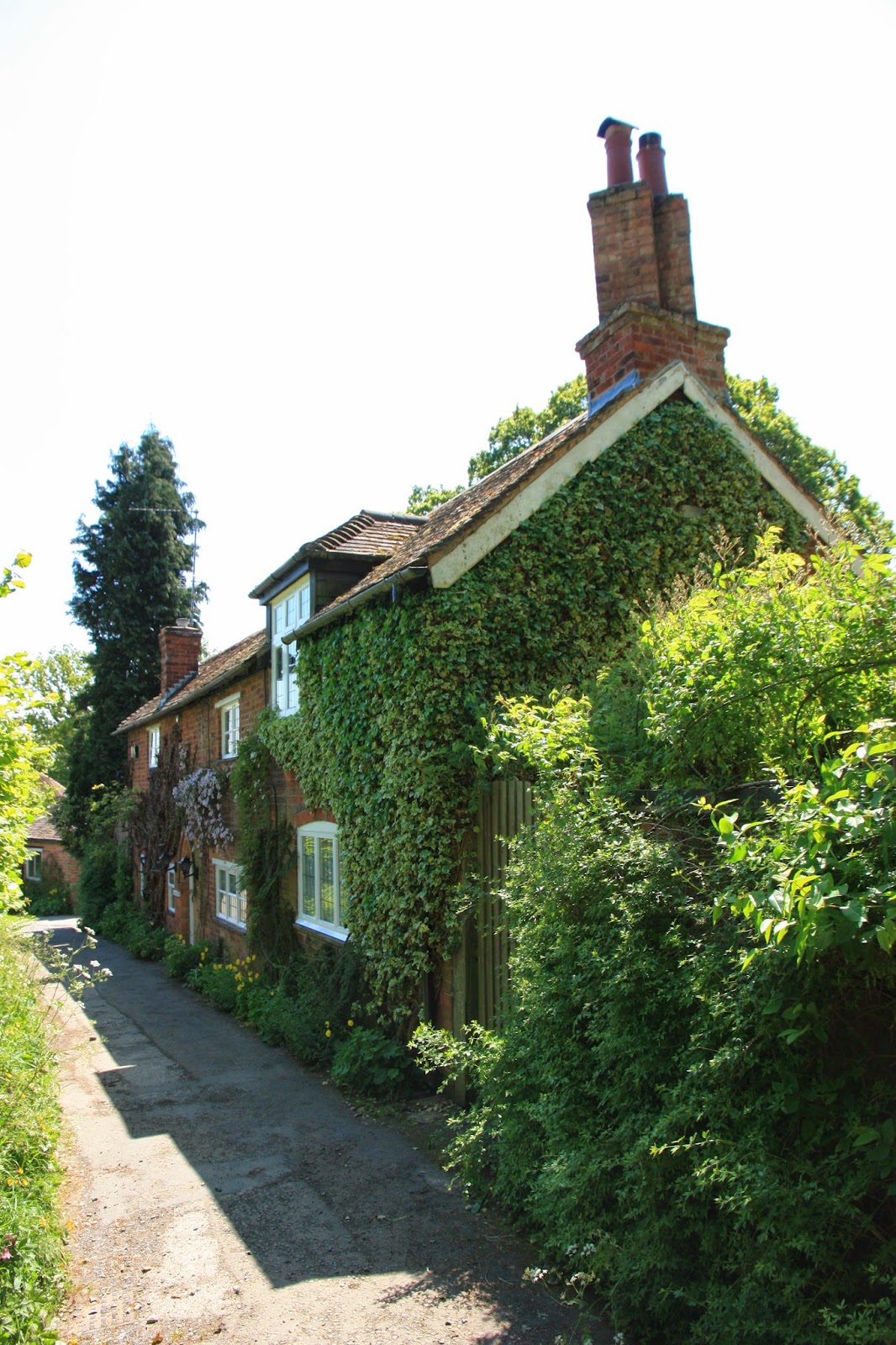 The settlements are comprised of 18th through 20th century cottages, many of which represent the former dwellings of the agricultural and industrial workers of the farms, brickworks and canal. Several historic public houses form landmark structures within their respective settlements, with Cooper’s Hill defined by large, statement Victorian through early 20th century dwellings along a highly enclosed historic route alongside further 19th and 20th century cottages. A number of well-preserved and maintained historic farmsteads intersperse the rural landscape, further enhancing the historic landscape character and setting of the area.

The linear infrastructure of the Worcester to Birmingham canal and the ‘Cross-City’ (historically ‘Gloucester Loop Line’) railway demarcate the furthest extents of the 20th century westward expansion of Alvechurch village. The brick canal bridges and plate-girder railway bridges therefore form highly distinctive gateways between the historic western parish landscape and the modern settlement. The canal has retained much of its historic character and condition through a continued commercial functionality facilitated by the expanded Alvechurch Marina, which services a now largely recreational narrow-boat industry. This, in conjunction with the continued industrial utilisation of the site of the historic Alvechurch brickworks has ensured a distinctive historic character persists through preserved canal-side features, architecture and activity. 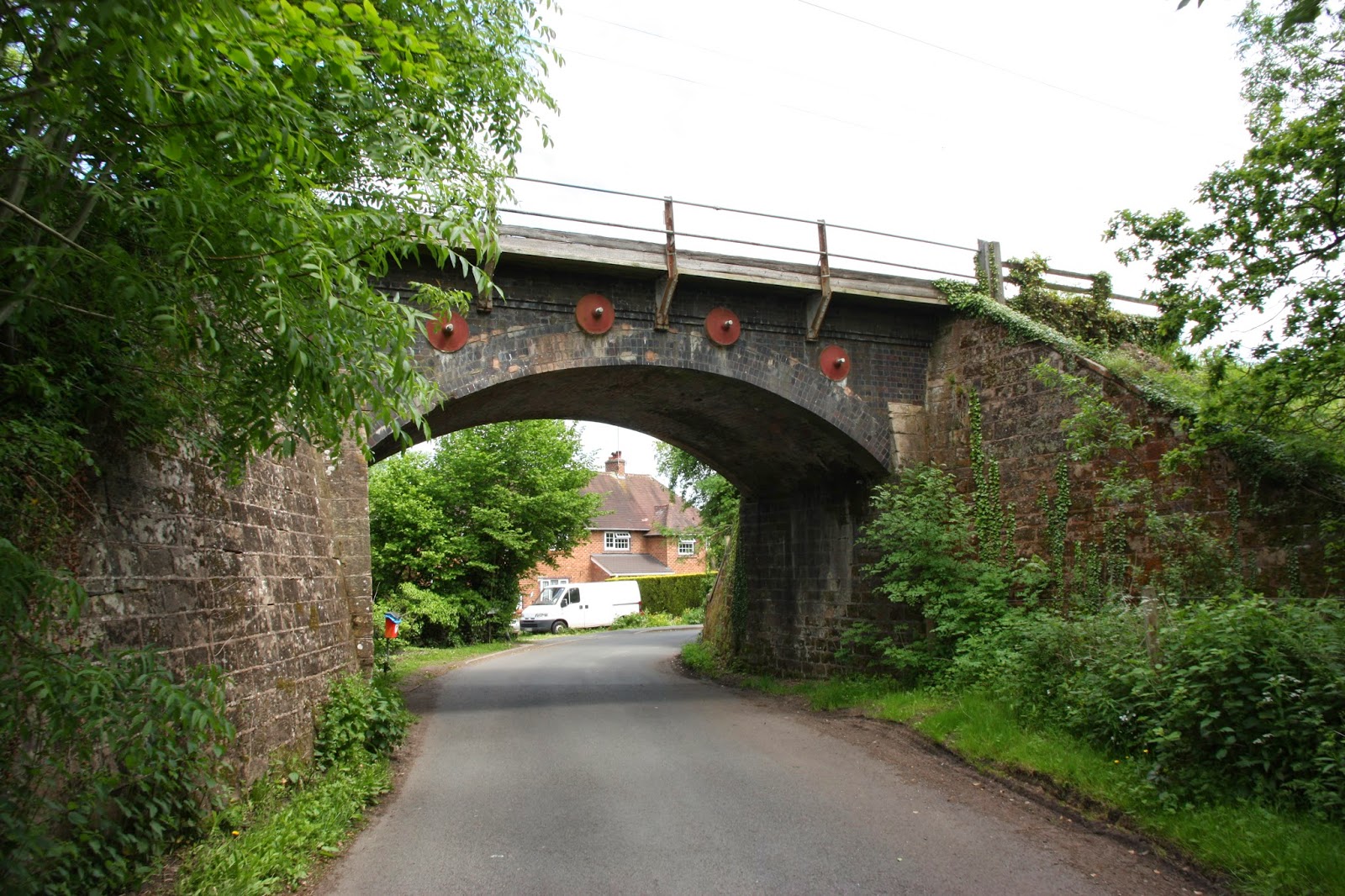 The landscape and its component ‘character areas’ are therefore seen to be of highly distinctive historic landscape character and of high sensitivity to degradation or fragmentation through development, redevelopment and modifications which do not appropriately reflect the area’s historic environment.

However, in spite of this clear historic environment value, sensitivity and local significance this landscape’s representation within statutory designations and records is particularly low: incorporating a single listed building, with no Conservation Area, Scheduled Monuments, or natural-environmental designations (such as Sites of Special Scientific Interest). Though numerous structures and archaeological monuments have subsequently been identified and recorded within the Historic Environment Record, these cannot adequately represent the collective influence of a diverse array of historic and archaeological features to a coherent landscape character and setting of distinctiveness and significance. 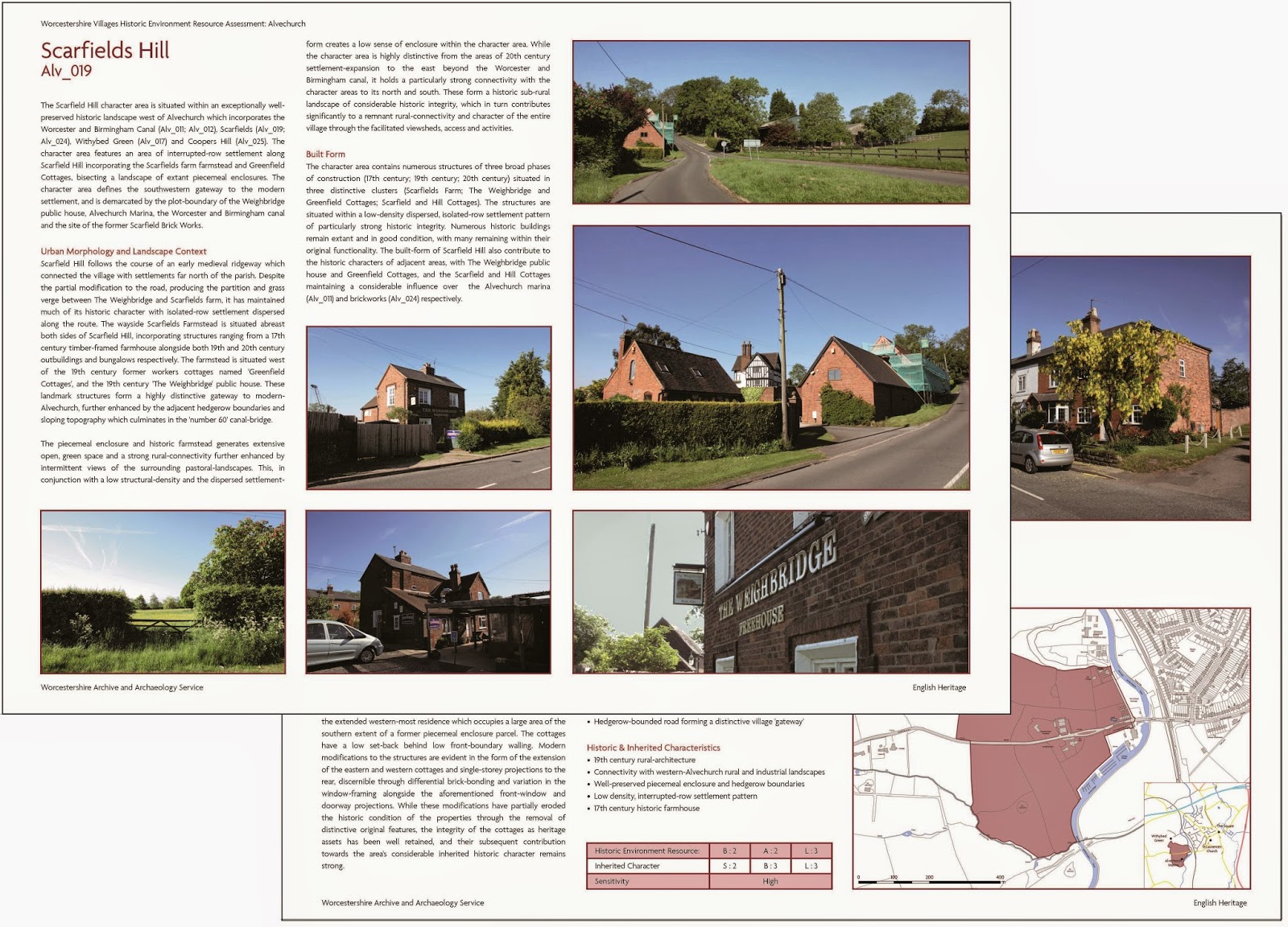 By ‘characterising’ such landscapes, and producing ‘character statements’ (accessible by following this link – see statements Alv_011; 017; 019; 024; 025) we are able to more effectively promote the value and significance of these areas to the county as a whole. These statements record all the varied and distinctive attributes which collectively form the ‘character’ of an area, providing the evidence to justify their enhancement and/or conservation when managing landscape and environmental change.  The local importance of such landscapes, as the product of an amalgamation of numerous historic and archaeological features of lesser individual, but high collective value, can be readily promoted to ensure future discussion of potential development, or modification can be undertaken more sensitively and appropriately to the area’s historic environments.

Worcestershire Archive and Archaeology Service continues to pursue and undertake projects using historic characterisation to provide a means through which to channel and promote the significance of such landscapes within local and Neighbourhood planning, development, and conservation initiatives.

The project report and survey methodology can be downloaded here – http://public.worcestershire.gov.uk/sites/archaeology/Reports/SWR22275.pdf