As quite often happens when you are looking through the catalogues for particular archives, other entries tend to catch your eye! This happened recently when we spotted a journal written by Elizabeth Milbank in 1812 and deposited with us in 2000.

At the time Elizabeth was staying with the Countess Heiyden at her house in the city of Mitau, then part of the Russian empire and now in Latvia. 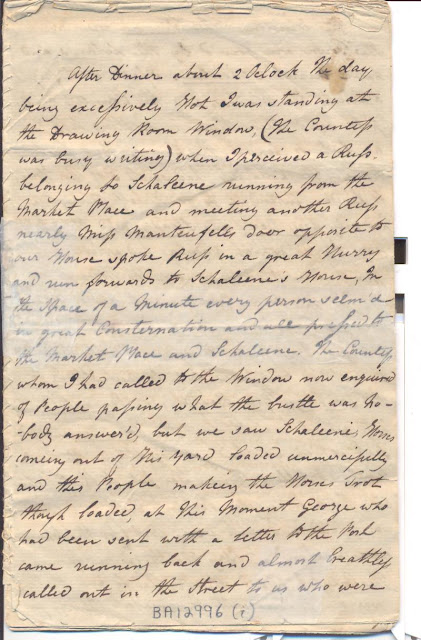 An extract from the journal of Elizabeth Milbank

The journal gives an insight into the life of the aristocracy when Russia was on the brink of being invaded by Napoleon’s forces.

Describing how French soldiers were nearing the town, having already burned down the school, she wrote: ‘I fell with fright against the window and the countess, quite pale, said ‘Then there is nothing left for us but to leave the town.”  Elizabeth and the Countess, together with an entourage of servants, dogs and even a cockatoo, left  the city for the port town of Riga, abandoning the house and all its contents to the mercy of the French army.

They did return, temporarily, to Mitau where they dug a deep hole in the woodhouse and buried the 24 piece dinner service which had been packed in boxes, they then covered it with earth and trampled it down. The also crammed the chandeliers, carpets, best tables, chairs and tables under the roof of the unfurnished wing of the house.

They returned to Riga but found life was becoming too dangerous there too, and once again they took flight.

We don’t know who Elizabeth Milbank was or what happened to her, but it seems that she was a friend or relative of the countess rather than a servant. 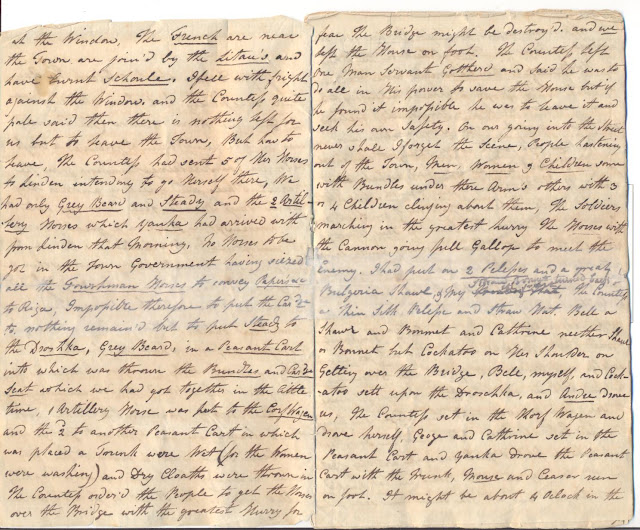